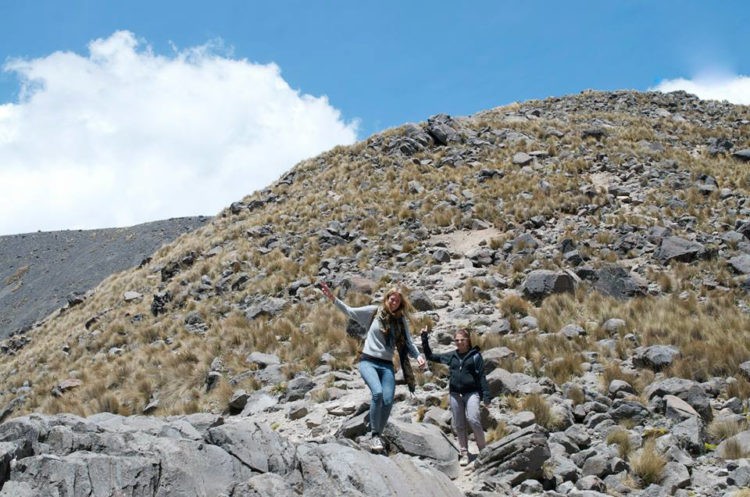 In addition to its image as a travel destination for beach holidays and jungle tours, Mexico is best known for its many mountains and volcanoes. Since the probably most famous volcano in Mexico, the Popocatépetl, is no longer open for climbing due to its eruptions, I show you two alternatives for a climbing day in Mexico.

The Nevado de Toluca is the fourth highest mountain in Mexico, 4690 meters high, and offers a stunning view from above of its two crater lakes. It is best to climb to the top of the mountain to get an overview. Afterwards you can climb down winding paths, through bare vegetation and if the weather is good, you can swim in the ice-cold crater lake or enjoy a picnic with a view over snow-covered peaks, even in summer.

Where is Nevado de Toluca and how do I get there?

In the middle of the Nevado de Toluca National Park, near the city of Toluca, only about 60 kilometers from Mexico City lies this extinct volcano. The way to the entrance of the national park is signposted from the village Raices. If you drive to the upper of the two car parks, you can walk to the summit in about an hour. The path is steep and becomes a little strenuous on the last few metres, but is relatively easy to master even for unathletic people.

If you are dependent on public transport, it is best to take the bus to Sultepec and get off in Raices. Finding a ride or a colectivo (minibus) from there to the national park should not be a problem anymore.

What is special about Nevado de Toluca?

Compared to other mountains in Mexico, you reach the summit of the Nevado de Toluca quite fast and without special equipment. On the other hand it is much more touristy here than on the Malinche, for example. After the storming of the summit you can walk down to the two crater lakes Laguna del Sol and Laguna de la Luna and take a bath in the turquoise water while there is still snow on top of the mountain.

Tip: Do not forget your sunscreen. Even with cloudy skies and temperatures just above zero degrees, you can catch a severe sunburn up there within a few hours. Speaking from experience.

In four hours to the summit at 4,461 metres - and that without meeting a single person. Climbing the Malinche is a special experience, if only because of its legendary history. After all, the mountain is named after the most famous traitor of the former Aztec empire.

Already to get to the Malinche is much more complicated than to the Nevado de Toluca. Probably a reason why one hardly meets any other people during the whole ascent. From the CAPU, the bus station in Puebla, you first take a coach to the village of Apizaco and from there ask your way through to the station where the colectivos leave. Colectivos drive to the entrance of the national park regularly in about one hour.

Malinche - What is special?

On the first few kilometres towards Malinche, you will probably have the feeling that you are taking a walk in the forest and not climbing the mountains. But as soon as you leave the forest, it suddenly gets quite steep and the condition is definitely more demanding than on the Nevado de Toluca. Thank God you can always take a break and admire the unique landscape.

The surroundings here are also completely different: light fog and no people give you the feeling of having landed in the loneliest, most magical place on earth. Shortly before the summit, the whole thing really turns into a climbing tour rather than a hiking tour. The steepest, last section leads over large scree towards the summit. The view next to the summit cross compensates for the effort immediately.

If you do not have great ambitions to climb or do too much sport, you better go to the Nevado de Toluca. Also there you will have climbing fun with a great view. However, the Nevado de Toluca is a bit crowded with tourists in some places. But you can make it to the summit within an hour. If you have a bit more time, are fit and better equipped, the Malinche is the more interesting alternative. The ascent takes three to five hours, depending on your fitness. However, you are usually completely alone up there with yourself and nature.